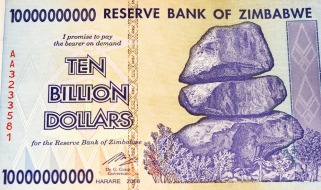 The Rogue Nation of -Inflation is a massive, environmentally stunning nation, ruled by Robert Mugabe with an iron fist, and renowned for its closed borders, frequent executions, and fear of technology. The hard-nosed, cynical, devout population of 2.649 billion -Inflationians are ruled without fear or favor by a psychotic dictator, who outlaws just about everything and refers to the populace as "my little playthings."

The enormous, corrupt, moralistic, socially-minded, well-organized government prioritizes Law & Order, with Defense, Administration, and Education also on the agenda, while International Aid isn't funded at all. It meets to discuss matters of state in the capital city of Harare Safari. The average income tax rate is 70.3%, and even higher for the wealthy.

The sizeable but stagnant -Inflationian economy, worth 7.87 trillion Zimbabwean Dollars a year, is driven entirely by a combination of government and state-owned industry, with private enterprise illegal. However, for those in the know, there is a large, well-organized, quite specialized black market in Pizza Delivery, Gambling, Basket Weaving, and Cheese Exports. The private sector mostly consists of enterprising ten-year-olds selling lemonade on the sidewalk, but the government is looking at stamping this out. Average income is 2,969 Zimbabwean Dollars, and distributed extremely evenly, with practically no difference between the richest and poorest citizens.

Blind dates tend to result in bruised shins, giggling teens are asked to put their mouths on rubber dolls, Robert Mugabe often plays real life games of Tower Defense against hordes of angry villagers, and foreign students are expected to have a Kegmeister Grade Average of 36-24-36 to qualify for university. Crime is totally unknown, thanks to the all-pervasive police force and progressive social policies in education and welfare. -Inflation's national animal is the Homosapien, which frolics freely in the nation's many lush forests, and its national religion is Robert Mugabeism.

-Inflation is ranked 216,128th in the world and 10th in Hole To Hide In for Least Corrupt Governments, with 87.08 Percentage Of Bribes Refused.