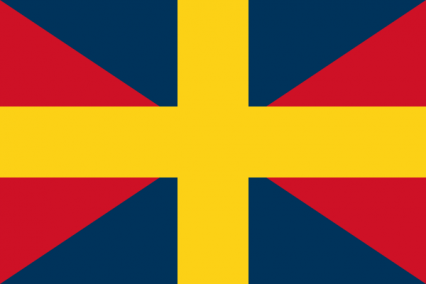 The Stratocracy of -Allemeine is a gargantuan, socially progressive nation, ruled by Rollo with an even hand, and renowned for its daily referendums, ubiquitous missile silos, and irreverence towards religion. The hard-nosed, hard-working population of 10.485 billion -Allemeinens are either ruled by a sleek, efficient government or a conglomerate of multinational corporations; it's difficult to tell which.

The relatively small, corrupt government is dominated by the Department of Defense, with Education and Industry also on the agenda, while Environment and International Aid aren't funded at all. It meets to discuss matters of state in the capital city of Allemeine City. Citizens pay a flat income tax of 49.7%.

The frighteningly efficient -Allemeinean economy, worth a remarkable 2,048 trillion Kroner a year, is broadly diversified and led by the Arms Manufacturing industry, with significant contributions from Information Technology, Uranium Mining, and Retail. Black market activity is extensive. Average income is an impressive 195,357 Kroner, but there is a significant disparity between incomes, with the richest 10% of citizens earning 628,335 per year while the poor average 46,004, a ratio of 13.7 to 1.

The nation's people have woken up to find themselves colonial masters of Brasilistan, "To Hell or to Marshland" is a common settler cry directed at native Brasilistanis, the nation's infamous boot camp is more brutal than most battlefields, and candidates make campaign speeches at the funerals of former rivals. Crime, especially youth-related, is totally unknown. -Allemeine's national animal is the Allemeinen Falcon, which teeters on the brink of extinction due to toxic air pollution, and its national religion is Church of Allemeine.

-Allemeine is ranked 129,915th in the world and 245th in The Order of the Grey Wardens for Largest Publishing Industry, scoring 1,660.5 on the Bella Potter Productivity e-Index.