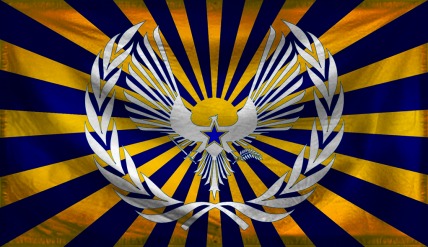 The Confederated Empire of Sovereign California is a gargantuan, cultured nation, ruled by Empress Fiora Devnostraeva with a fair hand, and remarkable for its multi-spousal wedding ceremonies, sprawling nuclear power plants, and irreverence towards religion. The hard-nosed, hard-working, democratic, humorless population of 40.461 billion Californians hold their civil and political rights very dear, although the wealthy and those in business tend to be viewed with suspicion.

The relatively small, corrupt, liberal, outspoken government juggles the competing demands of Industry, Education, and Healthcare. It meets to discuss matters of state in the capital city of Los Angeles ― Los Angeles NCD. The average income tax rate is 40.3%, but much higher for the wealthy.

The frighteningly efficient Californian economy, worth an astonishing 13,823 trillion Sovereigns a year, is led by the Book Publishing industry, with major contributions from Arms Manufacturing, Gambling, and Information Technology. Black market activity is rampant. Average income is an amazing 341,638 Sovereigns, and evenly distributed, with the richest citizens earning only 2.5 times as much as the poorest.

Appliance stores are finding spy cameras embedded in their unboxed merchandise, kids these days know how to throw a proper punch, dozens of viewers go online to hear whether a comma has been added to Clause 5 in Subsection B of Law 58375, and roadside walls are being built and mother nature is paying for it. Crime, especially youth-related, is pervasive, with the police force struggling against a lack of funding and a high mortality rate. Sovereign California's national animal is the Phoenix, which teeters on the brink of extinction due to toxic air pollution, and its national religion is Devnostraevism.

Sovereign California is ranked 6,974th in the world and 1st in Earth Prime for Highest Wealthy Incomes, with 528,657 Standard Monetary Units.