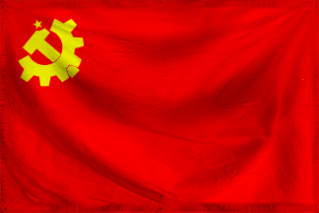 The Rejected Realms Travel Agent of Nerdocrombesia is a gargantuan, efficient nation, renowned for its sprawling nuclear power plants, irreverence towards religion, and punitive income tax rates. The compassionate, cynical, humorless population of 39.051 billion Nerdocrombesians are ruled with an iron fist by the socialist government, which grants its people the freedom to do whatever they like so long as it doesn't involve getting richer than anybody else or challenging the government.

The enormous, socially-minded, well-organized government juggles the competing demands of Industry, Education, and Defense. The income tax rate is 100%.

The frighteningly efficient Nerdocrombesian economy, worth a remarkable 8,912 trillion New Yeldan Pounds a year, is driven entirely by a combination of government and state-owned industry, with private enterprise illegal. The industrial sector, which is highly specialized, is led by the Automobile Manufacturing industry, with major contributions from Arms Manufacturing, Uranium Mining, and Information Technology. Average income is an amazing 228,231 New Yeldan Pounds, and distributed extremely evenly, with practically no difference between the richest and poorest citizens.

Anti-government web sites are springing up, the government extracts trade concessions from poor nations in exchange for humanitarian aid, the government is avowedly atheist, and the country's famous rainforests are being bulldozed by the mining industry. Crime is totally unknown, thanks to a well-funded police force and progressive social policies in education and welfare. Nerdocrombesia's national animal is the Running Dog, which is also the nation's favorite main course.

Nerdocrombesia is ranked 60,701st in the world and 6th in The Pleiades for Highest Wealthy Incomes, with 228,231 Standard Monetary Units.